Film / I Saw What You Did 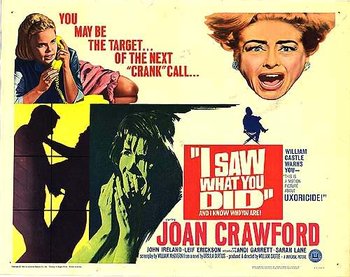 I Saw What You Did is a 1965 American thriller film released by Universal Pictures and starring Joan Crawford and John Ireland.

When two teenagers make prank phone calls to strangers, they become the target for terror when they whisper "I Saw What You Did, And I Know Who You Are!" to psychopath Steve Marek who has just murdered his wife. But somebody else knows of the terrible crime that was committed that night, the killer's desperately amorous neighbor Amy Nelson.

Tropes in I Saw What You Did include: