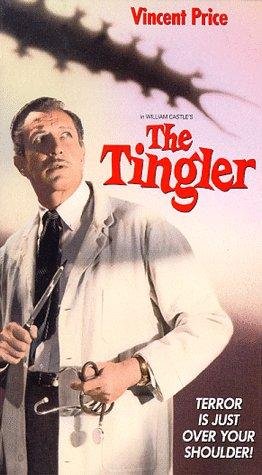 A 1959 Horror film with a famous gimmick. Directed by the man who did it the best, William Castle.

Vincent Price plays Dr. Warren Chapin, who is researching the shivering or "Tingling" sensation fear causes within all humans. Dr. Warren is introduced to Ollie Higgins, the relative of a criminal sentenced to the electric chair, while completing the autopsy of the corpse. Ollie asks for a lift from Dr. Chapin and introduces his deaf-mute wife, Martha, who manages a theater of her own.

He gives her Acid and Ollie "helps" unbeknownst to the Doctor.

When Martha dies of fear, Dr. Chapin performs her autopsy and finds a creature that lives inside every human being, a thing he had theorized about and jokingly referred to as "The Tingler", which appears to feed on fear and is kept in-check by screams. Martha was unable to scream, being mute, and was frightened to death. The Tingler grew from a microscopic creature to the size of a human arm.

Dr. Chapin removes the beast to study it, but it escapes... INTO THIS VERY THEATER!

Yes, that was the gimmick.

Inside the theater were actors who were 'attacked' by the Tingler, and joy buzzers hidden under certain seats, as if the tingler were attacking individual audience members. Although this gimmick is probably the main reason the movie is remembered, it's actually a pretty fun watch, featuring an excellent central performance from Vincent Price.