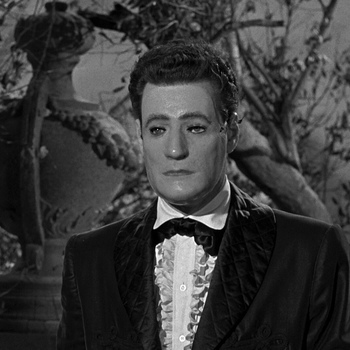 Baron Sardonicus, masked.
"A ghoul, as I'm sure you know, is a disgusting creature who opens graves and feeds on corpses."
— Baron Sardonicus
Advertisement:

Mr. Sardonicus is a 1961 horror film directed by William Castle and starring Guy Rolfe in the title role. It is based on the short story "Sardonicus" by Ray Russell.

Set in the year 1880, the film follows Sir Robert Cargrave (Ronald Lewis), a renowned surgeon specializing in paralysis, who receives a letter from his past love Maude (Audrey Dalton) and is invited to the mansion of her husband, Baron Sardonicus (Rolfe), in the fictional country of Gorslava.

When he reaches his destination he finds the reason for him to be there; the Baron's face has been paralyzed into a horrifying rictus grin

for many years, and he wants Richard's help. But his face is not the only thing twisted...

As with other William Castle films, the movie's main marketing gimmick was the audience's chance to decide the title character's fate by "penalty poll", the outcome of which supposedly affected the film's ending. The ending in which Sardonicus dies was purportedly the only one filmed (William Castle believed - apparently correctly - that no audience would ever vote for the merciful ending), although Castle claims both were shot and the 'good' ending was just never chosen; given Castle's tenuous relationship with the truth, who knows.