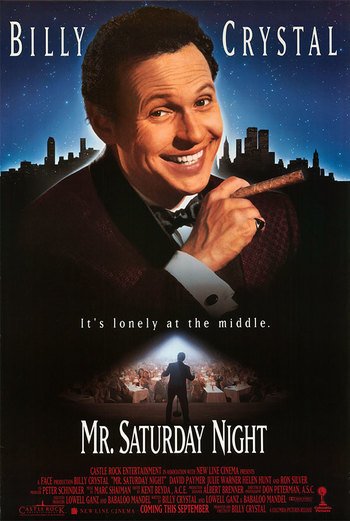 Mr. Saturday Night is a 1992 comedy-drama film that details the rise and fall of fictional stand-up comedian Buddy Young, Jr., played by Billy Crystal, who also makes his directorial debut with the film. The film is shown from the perspective of Buddy in present-day as an old man with flashbacks to his earlier life featuring his highs and lows. Also stars David Paymer as his brother Stan, who works as his manager, Julie Warner as his wife Elaine, and co-stars Helen Hunt and Ron Silver.

In 2021 Billy Crystal announced that he had adapted the film into a stage musical, which opened on Broadway on April 27 2022. Billy Crystal and David Paymer both reprised their roles from the film, and Crystal also co-authored the musical's book.