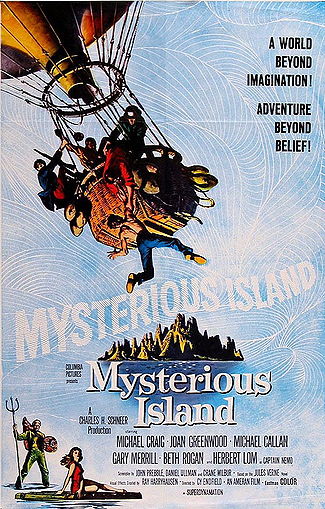 Directed by Cy Endfield and featuring special effects by Ray Harryhausen, the 1961 adventure film Mysterious Island was based on the novel The Mysterious Island by Jules Verne (no word on why they dropped the "The" from the title). In addition to Harryhausen's wonderful stop-motion animal used for the creatures of the island, the film also boasts a typically bombastic score by Bernard Herrmann, who'd previously worked with Harryhausen on The 7th Voyage of Sinbad.

During the American Civil War, a group of Union soldiers are held inside a Confederate prison camp. They stage a daring escape during a storm and steal an enemy observation balloon, only to find themselves blown out to sea, where they wind up stranded on a seemingly deserted island. The gang includes Captain Cyrus Harding (Michael Craig), his men Herbert Brown (Michael Callan) and Neb Nugent (Dan Jackson), war correspondent Gideon Spilett (Gary Merrill), and a Confederate soldier named Pencroft (Percy Herbert) who cooperates with the Yankees mostly out of mutual benefaction. They're soon joined by two survivors from a sunken ship, Lady Mary Fairchild (Joan Greenwood) and her niece Elena Fairchild (Beth Rogan), who quickly begins making goo-goo eyes at the virile young Herbert.

Very quickly, the castaways discover that the island isn't so uninhabited after all! Giant versions of ordinary animals live there, and naturally prey on the new arrivals. In addition, the place turns out to be a hangout for a pirate crew, as well as — unbeknownst to the pirates, of course — the secret base of the infamous Captain Nemo (Herbert Lom). Oh, and the island's central volcano is due to erupt, meaning their stay will have to be drastically shortened unless they want to get barbecued.