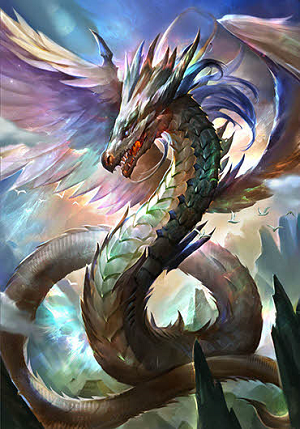 Feathered Serpents, also known as Plumed Serpents or Quetzalcoatls, are supernatural entities featured in many Mesoamerican cultures, starting from the Olmecs (this makes this trope Older Than Dirt). Its name at the time was likely meant to represent the dual nature of the entity: its feathers were meant to show its divine nature for showing the ability to fly, while the fact that it's a serpent represents its human nature with its ability to creep on the ground among other animals of the Earth. This was very common among Mesoamerican deities. Nowadays, though, this trope mostly gets used due to Rule of Cool.

Note that a character or creature being called a Feathered Serpent or Plumed Serpent or being named after the Trope Codifiers, the gods Kukulkan, Q'uq'umatz and Quetzalcoatl, does not automatically make them a case of this trope. It's the image that's important, not the name. Thus Quetzalcoatl from Godzilla: The Series (who is more or less a Kaiju Archaeopteryx

), and another Quetzalcoatl from The Secrets of the Immortal Nicholas Flamel (who is pretty much human in appearance aside from having a feathered tail and forked tongue) are not examples of this trope.

Such beings will sometimes be referred to as simply Coatls or Couatls, especially if present as a non-divine or physically unimposing species. Although often a truncation of the name "Quetzalcoatl", the word "coatl" is also the Nahuatlnote the Aztec language word for "serpent".

Related to Basilisk and Cockatrice, which could be considered an Old World equivalent appearance-wise, and the more recent phenomenon of Feathered Dragons.

As a gender flip of the Aztec god Quetzalcoatl, Lucoa's true form is a massive flying serpent with a feathered mane and wings.

As a gender flip of the Aztec god Quetzalcoatl, Lucoa's true form is a massive flying serpent with a feathered mane and wings.