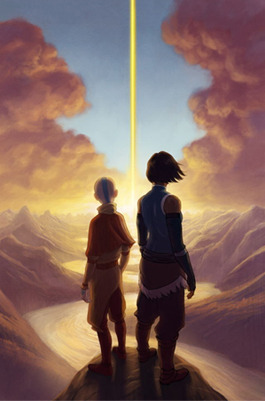 on Bryan Konietzko's Tumblr.
Only the Avatar can master all four elements and bring balance to the world.
Advertisement:

The Avatar: The Last Airbender universe is a canon created by Bryan Konietzko and Michael Dante DiMartino for Nickelodeon.

It takes place in an East Asian-influenced Constructed World divided into nations based around the elements of water, earth, fire, and air. Some people from each nation, called "benders", have the ability to control the element on which their nation is based.

One person, the Avatar, has the ability to bend all four elements, and is reincarnated into each of the nations upon his or her death in an endless cycle. The main character of each work is this Avatar, and he or she must undergo the trials, tribulations and responsibility of holding that power.

Works in the original canon

Not to be confused with other meanings of the term "avatar".

Tropes common to the franchise:

Alternative Title(s): The Legend Of Korra, Avatar The Last Airbender