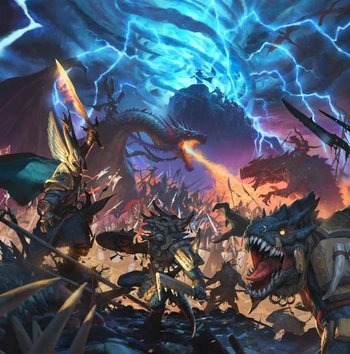 "Defend your world. Destroy theirs."
"Millennia ago a great vortex was forged to protect the world from a terrible threat, now that vortex falters and all stands on the brink of ruin! From all sides powerful forces gather to harass its energy for their own purposes. The noble High Elves, proud defenders of Ulthuan! From the jungles of Lustria, come the cold blooded Lizardmen! The Skaven stir in vast subterranean lairs! And the sadistic Dark Elf hordes spew forth from Naggaroth! The race is on, and the fate of the world will lay in the hands of the victor!"
— The Advisor, Enter the Vortex Trailer
Advertisement:

, confirmed for release later that year with the introduction of the Dark Elves, High Elves, Lizardmen and Skaven. It is to take place in the New World, Ulthuan and the Southlands, and will focus one the Vortex in Ulthuan, a maelstrom of arcane energies created by High Elf mages to drain excess magic and Chaos influence from the material world, and the playable races' struggle to control both it and the Ley Line network in Lustria. Players who own both games, as well as individual DLC packs, will have the option of playing them separately or as a single combined campaign map, the massive Mortal Empires campaign.

Millennia ago, besieged by a Chaos invasion, a conclave of High Elf mages forged a vast, arcane vortex. Its purpose was to draw the Winds of Magic from the world as a sinkhole drains an ocean, and blast the Daemonic hordes back to the Realm of Chaos. Now the Great Vortex falters, and the world again stands at the brink of ruin.

Powerful forces move to heal the maelstrom and avert catastrophe. Yet others seek to harness its terrible energies for their own bitter purpose. The race is on, and the very fate of the world will lie in the hands of the victor.

Prince Tyrion, Defender of Ulthuan, guides the High Elves in their desperate efforts to stabilise the vortex as it roils above their home continent.

Atop his palanquin-throne, the Slann Mage-Priest Mazdamundi directs his Lizardmen war-hosts as they surge northward from Lustria. He, too, is intent on preventing cataclysm, though the methods of The Old Ones must prevail.

The Witch King Malekith and his sadistic Dark Elf hordes spew forth from Naggaroth and their labyrinthine Black Arks. He tastes great weakness in the vortex – and great opportunity in its demise.

Meanwhile in the Under-Empire that spans across the world, The Skaven have sent forth Queek Headtaker for a diabolical quest to gather warpstone, all in an attempt to gain control of the vortex in the name of the Horned Rat and the Council of Thirteen.

In the vast sandy expanses of Nehekhara, the Tomb Kings awaken once more from their deep slumber, rising from dry crypts with Settra The Imperishable in the lead to secure their dominance once and for all by going on a quest to find the missing books of Nagash The Undying.

Across the misty seas and the salty ports of Eastern Lustria, The Undead Pirates of The Vampire Coast have had enough of simple plunder and pillaging of the ships and boats sailing the oceans, leading Arch Grand Commodore Luthor Harkon to search for more than mere treasure... for the Star-Metal Harpoon lies in the deeps, a weapon powerful enough to bring the greatest Merwyrm of them all to heel!

Six races, six outcomes, a single goal: control of the magics of the world, for good or ill.

The core gameplay remains relatively unchanged from the first game (functioning more like a massive Expansion Pack then a true sequel), but it contains several new features besides additional races, such as Rites; powerful spells unique to each faction, activatable on the campaign map that provide a myriad of special boons both for the campaign and the battlefield, story focused campaigns for each race centered on the vortex, several new battlefield types, and a host of other changes that improve on the game that came before it.

The second of the trilogy is set in the New World and focuses on the factions of the setting warring against each other for control over the Vortex, as well as to further their own various goals. Playable Factions include the High Elves, the Dark Elves, the Lizardmen, and the Skaven. Two paid expansions added the Tomb Kings and the Vampire Coast to the setting, while other expansions and free add-ons have re-introduced special subfactions of the Empire of Man, the Kingdom of Bretonnia, the Greenskins, the Wood Elves, the Beastmen, and the Dwarfs to the setting.

Many tropes that apply here also apply to Warhammer, and vice versa.

A sequel titled Total War: Warhammer III was released in 2022, which features the Tzardom of Kislev, the Empire of Grand Cathay, the Daemons of Chaos (split among Khorne, Tzeentch, Nurgle, Slaanesh and Chaos Undivided), and the Ogre Kingdoms.

open/close all folders
A-D
E-I
J-P
Q-Z
"War is upon us. It is unending."
Feedback