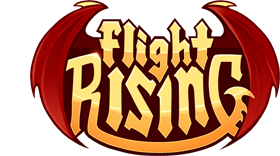 Flight Rising is a free Virtual Pet/breeding sim focusing on dragons. It launched on June 9th, 2013, following a wildly successful Kickstarter campaign. It was mainly created by Jessica P. "Undel" (the artist and author behind the Dragon Art: How to Draw Dragons series of drawing books) and Dana P. "Xhaztol". It features fourteen species of dragons, breeding, familiars, apparel, a Coliseum for both monster and Player Versus Player battles, holidays, and buying and selling dragons.

When you join the game you choose your 'Flight'note the eleven Flights are based off of elements, led by a deity who your clan will serve, and receive two dragons. One is player-customized and the other is randomly generated. Your clan's eye color and lair aesthetic are determined by your Flight’s element; you can swap to a different Flight (under a different deity) once every six months.

Players can alter the look of their dragons by adding inheritable genes, non-inheritable player-created skins or accents, and a variety of apparel items. Eleven months of the year include one Flight's holiday week, in which a special festival currency may be collected and exchanged for Flight-themed apparel and familiars.

Previously only open during specific periods, Flight Rising registration is now open at all times. It can be found here