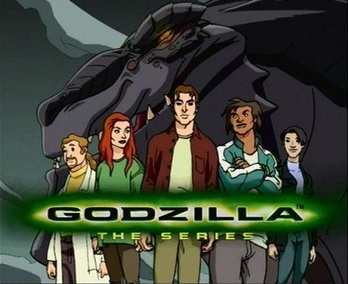 Putting the "God" back in "Godzilla". (Pictured from left to right: Mendel, Elsie, Nick, Randy and Monique.)
Godzilla: The Series (1998-2000) was an animated television series and the Sequel Series to the 1998 American version of Godzilla, produced by the Adelaide Productions division of Sony Pictures Television, and lasted a total of 40 episodes on Fox Kids.
Advertisement:

In the first episode, the last egg that Godzilla laid note Seen hatching at the end of said movie is found, it hatches and imprints on The Hero from the movie, Dr. Nick Tatopoulos. Naturally, he subsequently forms HEAT (the Humanitarian Environmental Analysis Team) with four other humans, Drs. Elsie Chapman and Mendel Craven (both from the movie, as well), as well as Randy Hernandez and Monique Dupre. With Godzilla Junior loyal to Nick, they defend the world from various Kaiju that have abruptly sprung up, crazy and/or sinister humans and, eventually, invading psychic aliens (naturally).

Zilla Jr is the main Kaiju character from the series Godzilla: The Series which is the better-received sequel series to the 1998 Roland Emmerich movie 'Godzilla'.

Zilla Jr is the main Kaiju character from the series Godzilla: The Series which is the better-received sequel series to the 1998 Roland Emmerich movie 'Godzilla'.