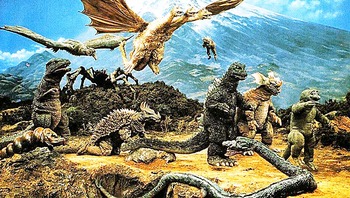 And this is just the Showa Era!
The Tohoverse is The 'Verse that Toho‘s Kaiju films are set in, it’s perhaps best known as the place Godzilla, Mothra, Rodan, and Ghidorah, the Three-Headed Monster inhabit.
Advertisement:

The Tohoverse is notable as one of the first Shared Universes in film along with Universal Horror, and for hosting some of the earliest Crisis Crossovers in fiction in the form of the aforementioned Ghidorah, the Three-Headed Monster and Destroy All Monsters, released decades before the trope became standard franchise procedure.

Tohoverse continuity is rather complicated, the best way to describe it is that Godzilla (1954) is the only film that happens no matter what, and that several Alternate Timelines springboard off its conclusion, for the sake of clarity and completion, several non-canon films and Alternate Continuities will be placed in this article due to the presence of Tohoverse characters and concepts in those pieces of media.

See also the MonsterVerse and the Shin Series, both of which feature elements of the Tohoverse in starring roles.