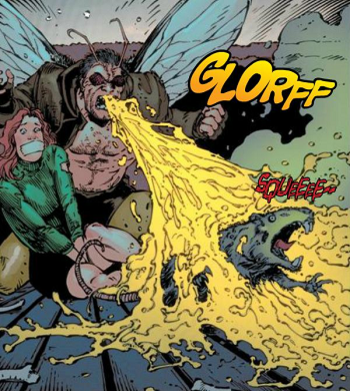 Yes, we all know pests need to be controlled one way or another, but this is a little much.
"How does Brundlefly eat? Well, he eats very much the way a fly eats. Brundlefly breaks down food with a corrosive enzyme. He regurgitates on his food, it liquefies and then he sucks it back up. Ready for a demonstration, kids?"
— Seth Brundle, The Fly (1986)
Advertisement:

While not one of the classical four elements, and not quite as common a "secondary" as electricity or ice, acid and the manipulation and control thereof is far from a rare inclusion in the roster of Elemental Powers and Stock Superpowers.

Acid tends to be very closely tied to poison — indeed, some works may not even draw a distinction between the two at all. When acid and poison are present in the same setting or game system, rather than being one and the same, the difference between the two tends to be that poison is treated similarly to disease and other status conditions — i.e., it is more a form of constitution and lingering damage that keeps sapping health rather than a true attack — while acid attacks deal direct, one-off physical damage like other elemental attacks do.

When not tied to poison, acid may instead be linked with water.

Power over acid is rarely associated with pleasant or benevolent figures: even when used by a heroic character, acid tends to be associated with harsher, darker heroic archetypes than other elements are. It's very rare indeed to see the Ideal Hero wielding acid as a weapon. Control over acids tends to also be associated with reptiles, likely due to their own ties to poison and less than stellar reputations; after fire and ice, acid is possibly the most common Breath Weapon for dragons. Acid, particularly acid spit, is also often associated with arthropods and arthropod-like monsters and aliens, while Blob Monsters, slimes, and similar creatures often possess acidic secretions.

Specific acid-based powers can take a number of forms. One common variation is for a character or creature to be able to create and release acid from their mouth, usually in the form of acidic Super Spit or a corrosive Breath Weapon. Another, more passive possibility is for the acid to be secreted from the skin, either constantly, at will or in response to certain stimuli, creating a caustic coating that damages anyone making direct contact with the acid's user. Acid can also be portrayed as dealing Armor Piercing damage, to represent it eating through enemy armor.

Note that, in real life, corrosive substances come in two distinct kinds: acids (low pH) and bases (high pH). As the differences between the two may not always be obvious to someone without some chemistry training, fiction tends to fold bases into acids and treats any reactive, corrosive substances as a nonspecific acid.

See also Hollywood Acid, for unrealistic depictions of acidic substances in general, and Zombie Puke Attack, which often uses this as its justification.