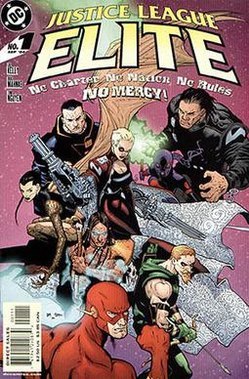 "No charter. No nation. No rules. NO MERCY!"
Advertisement:

Justice League Elite was a twelve-issue DC miniseries by Joe Kelly and Doug Mahnke, spinning off from JLA (1997) #100, in which the League and the Elite teamed up for an elaborate ruse to force the rest of the world to work together. In this miniseries, Flash, Green Arrow, Manitou Raven, and Major Disaster join the Elite to handle a couple of more sensitive jobs that the League couldn't openly deal with. Things quickly go wrong when their first mission results in the death of a dictator.