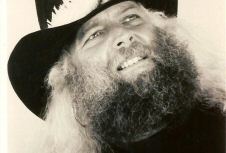 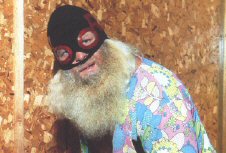 So, the heel cheated in a Loser Leaves Town match, or he got in the ear of an authority figure, and now a popular face has found himself unceremoniously ousted from the promotion. The fans of the face are screaming for justice. But never fear, Charlie Brown from Outta Town, the mysterious masked wrestler with an oddly familiar build and wrestling style, is here...

Charlie Brown from Outta Town is a pretty standard angle in Professional Wrestling; the face, who's been unjustly barred from the promotion, takes up a disguise and works to get himself reinstated and take revenge on the heels who cheated him. The trope's named for the particular implementation of the angle on Jimmy Valiant; after he lost a Loser Leaves Town match, a new wrestler, calling himself Charlie Brown from Outta Town, showed up, wearing a mask, but oddly enough, with Valiant's signature three-foot beard.

These masks aren't really meant to fool anybody, just create an air of "reasonable" doubt. The heels will often complain to the authority figure that the face is skirting the terms of his contract; however, a face authority figure will remain willfully ignorant of the masked man's identity, and a heel authority figure will bemoan the masked man's "iron-clad contract" (just how somebody can sign an "iron-clad contract" without revealing his real name is never really elaborated upon). Either way, the heels are left with only one alternative; reveal Charlie Brown's true identity, and send him packing for good this time!

Eventually, Charlie Brown gets the face reinstated, clears his good name, exhausts the "leaves town" period of the stipulation, or what have you, and rides off into the sunset just as the face returns and gives a big speech thanking his "good friend" who helped him so much. The most common subversion was to have the masked wrestler in danger of being unmasked and "permanently suspended," only for the "banned" wrestler to suddenly rush to ringside and cheer him on; this of course always involved a similar-looking alternate in the mask for that match. Of course, this is the happy ending to the story, but it's not the only possible ending; in one particular case, Mr. America was finally unmasked, revealing Hulk Hogan, who was subsequently fired (though it must be noted that this subversion was not the original plan; it was an instance of Real Life Writes the Plot, as Hogan had held out for more money once his contract expired).

This trope is something of an artifact. Throughout the territorial days of professional wrestling, there were a great number of masked wrestlers up and down the card, to where announcing the debut of a "new masked wrestler" on television was not an uncommon occurrence. Nowadays, not many non-Mexican wrestlers (most luchadores wear masks, and the mask has an entirely different meaning in Mexico) wear masks, making a "masked wrestler" stick out like a sore thumb.

The Trope Namer is presumably Peanuts, but no relation otherwise. Compare The Real Remington Steele, which is when the "Charlie Brown" persona returns as a Legacy Character coexisting with the original.

Warsman's cruel manager, Mr. Barracuda, is revealed to be the thought to be dead Robin Mask.

Warsman's cruel manager, Mr. Barracuda, is revealed to be the thought to be dead Robin Mask.