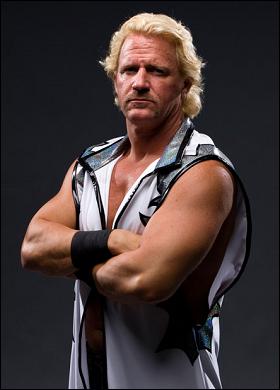 Ain't he great? lest you don't piss him off, slappy.
Advertisement:

Jeffrey Leonard Jarrett (born July 14, 1967) is an American professional wrestler and professional wrestling promoter, who was active in WCW and WWF, and the co-founder of both TNA and Global Force Wrestling. A third-generation wrestler (being the son of legendary promoter Jerry Jarrett), he opened in 1986 as a babyface country singer; hence his artifact gimmick, that of smashing guitars over peoples' heads. But he had trouble getting over with fans, who dismissed his exposure as pure nepotism.

Jeff responded by turning heel (as unpopular wrestlers are wont to do), and all was well — he went to WWF, then to WCW for a year and to WWF back again, until he left under a cloud after his contract ran out and he demanded a big payday for jobbing to Chyna; it wasn't until 2018, 19 years after Jarrett left, that the two sides publicly reconciled with Jarrett's induction into the WWE Hall of Fame and appeared as entry #2 in the 2019 Royal Rumble.

He had better success as a member of WCW's New Blood stable and in TNA's nWo attempt (Immortal). As an in-ring performer, he is best known for his smarmy, cowardly nature.

He was inducted into the WWE Hall of Fame in 2018.