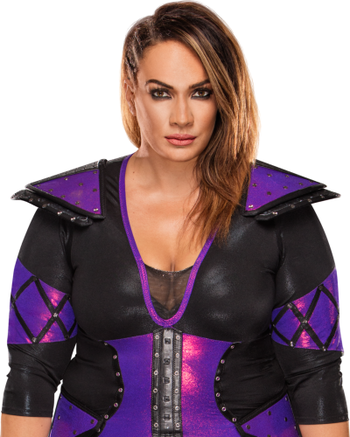 Savelina "Lina" Fanene (born May 29, 1984) is an Australian-born American professional wrestler and plus-size model. She is best known for her time in WWE performing under the ring name Nia Jax. She modeled and played college basketball prior to her wrestling career. She was signed by WWE in early 2014, performing in a house show under the ring name Zada in May 2015. She finally debuted on NXT in October under the name Nia Jax as a monster Heel, teaming up with Eva Marie for a brief period. She challenged for the NXT Women’s Championship twice, and was moved up to the Raw brand during the 2016 draft.

In March 2018, she turned Face after being betrayed by her supposed best friend Alexa Bliss, and went on to challenge Bliss for the WWE RAW Women’s Championship. She won the match at Wrestlemania 34, becoming RAW Women’s Champion for the first time in her career. She was released from the company as part of the latest round of mass talent releases on the 4th of November 2021, following allegations of backstage heat with Charlotte Flair.

Although not officially retired, Fanene has stated on twitter that a return to the ring is "unlikely" due to various injuries.