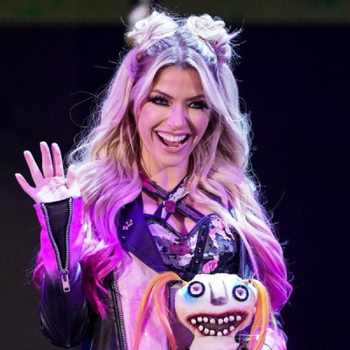 Stand up. Shut up. And fight me.
Advertisement:

An athlete growing up, Lexi competed in various softball, track and kickboxing leagues. She was also a gymnast and competitive cheerleader in college, reaching Division I status. She also spent time in competitive bodybuilding, first competing in the Arnold Classic in 2011.

As a fan of professional wrestling, she jumped at the opportunity when WWE came calling. She was signed after impressing in a tryout camp in 2013. A year later she made her ring debut, under The Gimmick of a glitter-loving 'fairy princess'. She mostly competed in the odd match here and there before turning heel to become the manager of Blake and Murphy, who held the NXT Tag Team Championships at the time. However she has not remained a Neutral Female — she has challenged for the NXT Women's Championship more than once, and since being drafted to SmackDown Live as part of the 2016 brand split, she has staked her claim as a challenger for the WWE SmackDown Women's Championship, eventually winning it for the first time in December 2016.

In 2020, after being attacked by the Fiend, Alexa began displaying noticeably different behaviour, including changing her hairstyle, admitting to a fascination with him, and later going into a trance and hitting the nearest person with a Sister Abigail whenever anyone said 'The Fiend'. After several weeks of this behaviour, the Fiend crashed the KO Show to approach Alexa, who willingly took his hand, aligning herself with him. In the ensuing weeks, Alexa and the Fiend have been terrorizing Raw, and God help anyone who catches their attention. Bliss shockingly split away from The Fiend at WrestleMania 37, and the night after introduced her Creepy Doll Lily, claiming to have learned everything she needed from Bray and that...Lily made her do things. With live crowds returning in July 2021, Bliss seems to have acquired the ability to hypnotize her victims simply by staring in their eyes, with Lily being "placed in timeout" for the time being. Now Lilly has returned. And Eva Marie was foolish enough to provoke Alexa's wrath.

"Let These Tropes In."