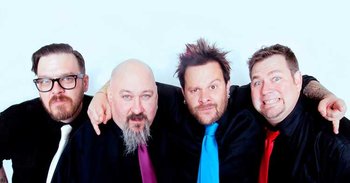 Are they bowling to get soup, or bowling on behalf of soup?
''"She works at hot topic,
His heart microscopicShe thinks that its love but to him its sexHe listens to emo but fat mike's his heroHis bank account's zeroWhat comes next?"''

Bowling For Soup (also known as BFS) is an American pop-punk band started in 1994 in Wichita Falls, Texas. Their songs focus on drinking, partying, peppy songs about being a high school Butt-Monkey and teenaged debauchery (the song High School Never Ends), and ones that are almost a deconstruction and analysis of the Unsympathetic Comedy Protagonist (the song A-hole). Other times they talk about the band being high school buddies and the Girl of the Week. Basically the kind of themes you'd find in an average Blink 182 song or a high school freshman's journal.

They also do the opening theme song for Phineas and Ferb (frontman Jaret Reddick also voiced a recurring character, Danny, in the series), the movie theme for Jimmy Neutron: Boy Genius, the main theme for Sonic Unleashed, a cover of Modern English's "I Melt With You" for Disney's Sky High (2005), and a cover of A Flock of Seagulls' "I Ran (So Far Away)" for the opening of Saint Seiya's English dub. As of 2012, Jaret Reddick is the new voice of Chuck E. Cheese.