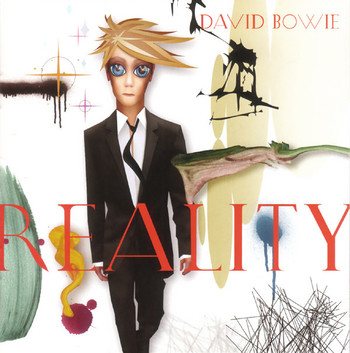 Reality, released in 2003, is the twenty-fourth studio album by David Bowie and the second album produced since the reunion of Bowie with longtime collaborator Tony Visconti. The album began production unusually quickly, with Bowie first writing the songs for it while the sessions for Heathen were wrapping up. This overlap enabled Reality to be the fastest-released studio album of Bowie's (by distance between its own release and the release of the preceding studio album) since The Buddha of Suburbia in 1993note it's not the top contender for fastest-released Bowie studio album though; that position goes to Pin Ups, which was released just six months after Aladdin Sane.

More straightforward Alternative Rock compared to its predecessor, it was followed by A Reality Tour. It was the highest grossing tour of 2004, gaining more than 700,000 attendees and a DVD release in 2010. However, Bowie suffered an eye injury from a lollipop being thrown at a concert in Oslo, only to be followed a week later by a heart attack while performing at a festival in Germany. It would be his last major concert. The events led to a long break, during which time Bowie would become more involved with raising his young daughter, save for the occasional guest vocals, acting role or assistance with music production. For nearly ten years Reality was considered his last album, with fans and press accepting that Bowie had comfortably retired, until an unexpected comeback in 2013 occurred with The Next Day.

The singles released from the album were "New Killer Star" and "Never Get Old", the latter of which was later mashed up with a re-recording of "Rebel Rebel" and released as the non-album single "Rebel Never Gets Old" in 2004.

"Trope me in the dark, let me disappear"