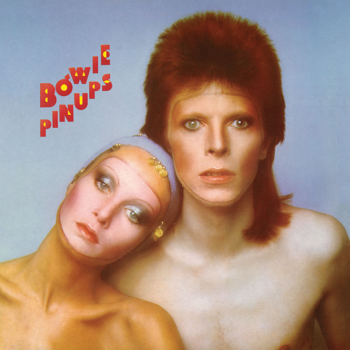 Pin Ups is the seventh studio album by English rock musician David Bowie, released in 1973. Coming out just six months after Aladdin Sane (the shortest between-album gap in Bowie's studio discography), the record is a Cover Album centered around British Invasion-era songs that Bowie considered to be both personal favorites of his and significant influences on his own work. The songs included on the record range from familiar names such as Pink Floyd, The Yardbirds, The Kinks, and The Who, to less well-remembered acts such as the McCoys, The Pretty Things, and the Mojos.

Co-producer Ken Scott (who ended his working relationship with Bowie after this album) stated that Pin Ups was envisioned partly as a direct antithesis to Bowie's previous studio albums; rather than being original songs that take musical influence from the past and present, Pin Ups consisted of preexisting songs with original musical arrangements on Bowie's part. The album was also designed partly to court listeners in America, where Bowie was still a cult hit at best despite his success in Britain, focusing on songs that were fairly obscure in the US so as to be less of a turn-off to audiences over there.

Of course, the album is more well-remembered by Bowie historians for its never-released follow-up: Pin-Ups was designed as the first part of a diptych centered around covers of songs from the 1960's; the second part, titled Bowie-ing Out, was planned to focus on American hits Bowie admired, including songs by artists such as Neil Young, Ronnie Spector, and outsider musician the Legendary Stardust Cowboy. Bowie repeatedly attempted to revisit the concept over the course of his career, coming closest to it with the cover-heavy Tonight in 1984 and the inclusion of songs intended for a Pin Ups follow up on Heathen in 2002 and Reality in 2003. However, a true follow-up to the 1973 cover album would never fully come to fruition.

Pin Ups was a massive commercial success in both Britain and Finland of all places, topping the charts in both nations. Despite being an American-oriented album, however, it would be met with a somewhat more subdued level of success, only reaching No. 23 on the Billboard 200. The album's one and only single, "Sorrow", was also a considerable success in the UK as well, peaking at No. 3 on the charts there and topping the charts in Australia, New Zealand, and South Africa.