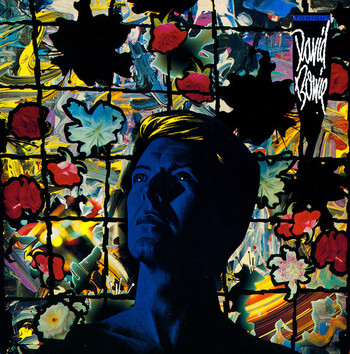 "Prayers, they hide the saddest view"
"A night like no other..."
—Tagline from the album's advertising campaign.
Advertisement:

Tonight is the sixteenth studio album by David Bowie, released in 1984.

Bowie had finally hit the big time with his predecessor Let's Dance, both commerically and financially. Having gained a new audience of adoring fans, Bowie realised he had no choice but to retain them through releasing new music as soon as possible. However, having just finished touring for Let's Dance a tired Bowie was struggling to overcome writer's block.

What followed was an album that featured just two original compositions for the album by Bowie alone. Five songs involved his longtime friend Iggy Pop (who, unlike Bowie, had fallen on hard times), three of those Pop-involved songs are covers, and two songs are covers of songs by other artists. Bowie himself would thusly describe the album as a rough sequel to his 1973 Cover Album Pin Ups in an interview.

Like Let's Dance before it, Tonight was a considerable commercial success for Bowie, topping the charts in the UK and the Netherlands, peaking at No. 11 on the Billboard 200, and going double-platinum in Canada, platinum in the United States, and gold in the UK, France, New Zealand, and Spain.

Tonight was supported by three singles: "Blue Jean", Bowie's cover of the Title Track (originally an Iggy Pop song), and "Loving the Alien". The first of these three was accompanied by Jazzin' for Blue Jean

, a 21-minute Direct to Video short film directed by Julian Temple in which Loser Protagonist Vic (played by Bowie) falsely claims that he personally knows legendary and eccentric rock musician Screaming Lord Byron (also played by Bowie and a sort-of self-parody) to impress her and goes to absurd lengths to try and hold the lie together when she challenges his claims.