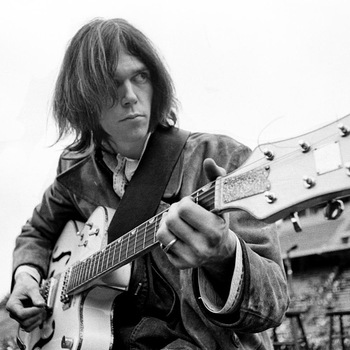 "Old man, look at my life
I'm a lot like you were"
"My my, hey hey
Rock and roll is here to stay
It's better to burn out than to fade away
My my, hey hey"
Advertisement:

Neil Percival Young OC (born November 12, 1945 in Toronto, Ontario) is one of the most influential singer-songwriters of the late 20th century, having written and recorded numerous popular and critically-acclaimed songs and albums since the 1960s. Though best known for his solo work, he was also a member of Buffalo Springfield and has performed with Crosby, Stills, and Nash, albeit on an irregular basis. As of March 2020, he has released somewhere around forty-onenote The complexity of his discography makes defining the exact number somewhat complicated - for instance, is Rust Never Sleeps, which is a collection of previously unreleased songs that was recorded mostly live, but then had overdubs and other studio effects applied, a live album, a studio album, or both? studio albums under his own name, along with eight live albums, several compilations, and a slew of recordings with other bands and as collaborations with other artists.

His style changes often, with his albums falling into blues, acoustic folk, rockabilly, jazz, and even electronic. He is sometimes called the Grandfather (or Godfather) of Grunge, as his ability to fuse harsh, noisy guitar playing with catchy tunes was a strong influence on both the bands that would later popularize that genre (Nirvana, Pearl Jam) as well as Alternative Rock in general (Sonic Youth, Dinosaur Jr.). Young is also adept with many different instruments, though is best known for the piano, harmonica, and guitar. His unique personal voice ranges from choirboy altonote especially in his younger days, when he deliberately pitched his voice in a countertenor range like Roy Orbison to growly baritone, and while his lyrics may be very strange, he enunciates clearly and you can always understand what he is saying.

Though well-known in America and currently living in California, Young was a Canadian citizen until 2019. Wishing to vote in the upcoming presidential election, he applied for American citizenship status, and now holds dual citizenship, calling himself a "Canarican". He has always been very vocal about American policies and politics, and is a well-known liberal activist, focusing especially on environmental issues. He is also an active philanthropist, having founded The Bridge School and the benefit concert, Farm Aid. He is also a sometime engineer-inventor, whose most recent projects are a prototype electric carnote which Neil describes in his Autobiography as having been constantly catching fire for nearly 20 years and the PONO music system which plays extremely high-resolution digital sound.note which may have been a fundamentally misguided venture from the very beginning, as both FLAC and 320kbps MP3 existed when PONO was first conceived of by Neil. He may have simply listened to a very low-quality MP3, and believed that all MP3s just sounded like that.

In December 2017, he put his entire solo discography up for $2 per month (much of it is still free) on his Neil Young Archives

site. Moreover, it's all in high-quality lossless audio. Some of his works with other bands, such as the Buffalo Springfield and Crosby, Stills, Nash & Young material, still aren't up yet (presumably rights issues are involved). Young also notes on the site that "it is not yet complete as we are still adding a lot of detail to the older recordings."

Rolling Stone recognizes him as the seventeenth greatest guitarist of all time on their list of 100 Greatest Guitarists of All Time. Young has been inducted into the Rock & Roll Hall of Fame twice, in 1995 as a solo artist and in 1997 as a member of Buffalo Springfield. He was also named an Officer of The Order of Canada in 2009.

Not to Be Confused with Young Neil.

Major releases under his own name by release date (yyyy-mm-dd format):

See Crosby, Stills, Nash & Young and Buffalo Springfield for more info on his work with those bands. (This list also excludes collaborations with other artists, such as the Stills-Young Band which doesn't have its own page here yet.)