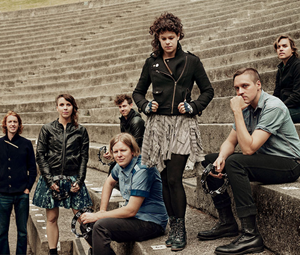 "You can't watch your own image and also look yourself in the eye."
— Arcade Fire, "Black Mirror"
Influences:
Advertisement:

Since the release of their debut album Funeral in 2004, the band has emerged as one of the most prominent indie rock outfits this side of 2000, garnering near-unanimous critical favour, and acquiring a reputation for dynamic live shows as well as several famous fans. Bono and David Byrne have both sung their praises, and they've performed live with David Bowie, U2, and Bruce Springsteen. Arcade Fire are known for changing their sound between albums and once even between an EP and album, which always splits their fanbase.

Tropes associated with Arcade Fire include: