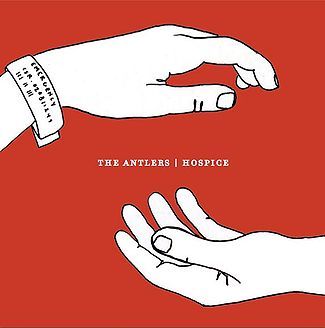 But something kept me standing by that hospital bed
I should have quit, but instead I took care of you
You made me sleep all uneven, and I didn't believe them
When they told me that there was no saving you.
— "Kettering"
Advertisement:

Hospice is the third studio album by Brooklyn indie band The Antlers with Sharon Van Etten making a guest appearance on vocals. It is the first Concept Album attempted by the band, as well as the first album released as a full group rather than frontman Peter Silberman's project. It was originally released in March of 2009, although demand was so great that it was officially reissued in August of that year.

The album's story tells of the doomed relationship between a hospital worker and a terminal cancer patient. The disease has left the patient in a deranged state and prone to violent mood swings, who she takes out any frustrations on the hospital worker who, despite the abuse, loves and supports her until her inevitable death. According to Silberman, this is all a metaphor for an emotionally abusive relationship, which is autobiographical to at least some extent.

Widely considered the band's masterpiece, Hospice went on to receive critical acclaim upon release; its lyrics and instrumentation were commended, and the emotional intensity of its concept led to it being deemed one of the most depressing albums of all time.

Coming from the tail-end of the decade, Hospice is considered one of the greatest albums of the 2000s and, for some, of all time, citing it as the In the Aeroplane Over the Sea of today.

Let's open up those tropes: