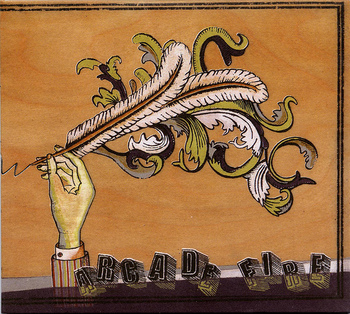 The power's out in the heart of man, take it from your heart, put it in your hand...

Funeral is the debut album by Canadian indie band Arcade Fire, released in 2004 through Merge Records. Self-produced (the album was mostly recorded by the band themselves in Creator Couple Win Butler and Régine Chassagne's apartment) and partially inspired by the recent deaths of various family members of the band, the album is noted for its epic, grandoise sound, emotionally blunt lyrical content and diverse use of instrumentation in spite of its' modest, indie label budget.

A Sleeper Hit upon its original release (thanks to its' endorsement by Pitchfork Media, who rated it a 9.7), Funeral has gone on to receive enormous acclaim worldwide, particularly in Europe, and has been championed as one of the best and most influential albums of the 2000snote The album is statistically the second-most acclaimed album of the decade, beaten only by Kid A, and is currently ranked at #27 on Acclaimed Music's compilation of critics' top albums lists.