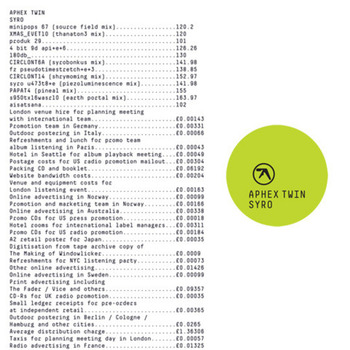 "[James] calls Syro 'my pop album, or as poppy as it's going to get,' which means that it contains vocals (performed by himself and members of his family and garbled beyond recognition) and bewitching melodies. It is, nonetheless, a heavy trip; a whirlwind tour of James's inscrutable brain, an unpredictable maze of things that shouldn't make sense together yet do; blaring rave basslines, poignant electro chords, splintered jazz fusion riffs, meditative piano, scorching acid plunges, elaborate breakbeat hieroglyphs, abrasive industrial clatter and sheer noise terror. If you're an Aphex Twin fan, it's both familiar and unfathomably strange - a transmission in a language only one man understands, and even he's not sure."
—Q magazine interview

His first release under the Aphex Twin alias since 2001's Drukqs (and first release of any new material since 2007's Rushup Edge as The Tuss), it had been in development for at least four years prior (though some tracks date as far back as 2007), supposedly being held back by personal events.

As the quote implies, Syro is a Genre Roulette of various musical styles, and an exploration into poppier musical territory (despite Richard's insistence that the album isn't "particularly innovative").

The album was promoted through various odd techniques: a link hosted on the Dark Web, graffiti of the Aphex Twin logo spread throughout New York City, press releases in broken English, and a green blimp flown over London.

Syro was released to critical and commercial success. Many critics saw it as a welcome return to form for James, and the album charted impressively in a multitude of countries, even smashing James' record for his highest-charting UK album (previously held by Selected Ambient Works Volume II). The arguable most impressive feat the album pulled off was winning the 2015 Grammy Award for Best Dance/Electronic Album, proving that James was not past his prime.

While James has stated that Syro is meant to be the end of an era, it also marks the beginning of a new era in sound and approach that continues to this day.