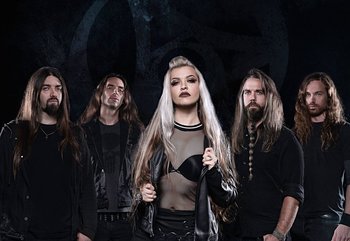 The current lineup. L-R: Simon, Danny, Vicky, Paco, Kells
Does history guide you, or do you set out to change it?
— "Business Suits and Combat Boots"
Advertisement:

The Agonist (formerly known as The Tempest) is a Canadian Melodic Death Metal/Metalcore band from Montreal, characterised by topical lyrics, complex guitar work and a female lead who can sing (well) in both clean and growling vocals.

Their lyrics often consider themes such as animal rights, social injustice and other contemporary issues. This fits in with the band's name: "agonist" means challenger.

In March of 2014, Alissa White-Gluz announced that she had been chosen as the next frontwoman for Arch-Enemy. She also revealed that the band - as fans knew it - was "over", and that Vicky Psarakis would be taking over as vocalist. Though the change has inevitably produced some backlash, the band have taken it in stride and produced two albums since: Eye of Providence in 2015, and Five in 2016. After bouts of touring, The Agonist went into production of their sixth album Orphans, released September 20, 2019.

Advertisement:
Members
Their current line-up is: