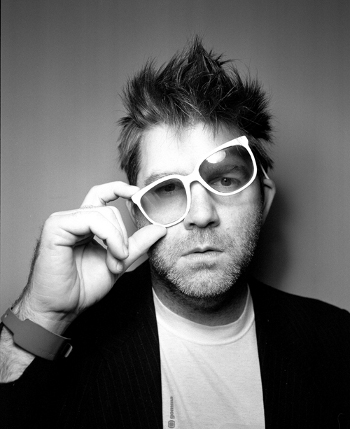 "and it keeps coming, till the day it stops..."
Advertisement:

LCD Soundsystem is an NYC-based Dance-Punk band formed in 2002 by James Murphy, who plays most if not all instruments on the records.

Murphy writes 90% of the music himself but normally brings in "guest" musicians to play everything out during recording. Every now and then, he records on his own as well. He's seen on stage with his fellow colleagues as well as by himself with just his synthesizer, so whether or not those other people are considered "part of the band" still sparks debate between fans. The band is known for Murphy's distinctive voice as well as the clever wordplay and oft-sarcastic tone found in their lyrics.

The band got their start in 2002 when Murphy released a handful of singles that got decent radio airplay on underground stations, the first of which was "Losing My Edge", which would go on to become a Signature Song for the band. After these successes, he got a few musicians to collaborate with him and wrote what would become the first LCD Soundsystem album, released in 2005 to critical acclaim and two Grammy Award nominations. "Daft Punk Is Playing at My House", one of the album's two singles, is to this day the band's most commercially successful single, and netted one of the album's two nominations.

Their next release was in late 2006 — a composition commissioned by Nike and titled "45:33" (although it's really 45:58 in length). In 2007, their second album, Sound of Silver, was released to further acclaim. In late 2008, the first hint at the band breaking up was made by member Al Doyle; however, both him and Murphy promptly denied this, and more music started being recorded in mid-2009. The end result was their third album, This Is Happening.

Murphy did publicly state several months before the album's release that it would likely be the band's final work, and while he later stated that the band would continue to record, February 2011 brought the announcement that LCD Soundsystem would be playing their final show on April 2 at Madison Square Garden. The show was sold out in 15 secondsnote necessitating the setup of four warm-up shows at New York's Terminal 5 with setlists almost identical to the MSG show, and, among other extravagances, ran for almost four hours, had Arcade Fire singing backup vocals, and featured the 80's post-punk band Liquid Liquid (a great influence on Murphy since the band's inception) as an opening act. All in all, the show was a spectacle rivaled by few concerts of its time, and proved to everyone that Murphy was actually ending the project — at least, for the foreseeable future.

At the tail end of 2015, murmurs of LCD Soundsystem reuniting in 2016 surfaced and were shut down, only for the sudden release of their first single in five years, "Christmas Will Break Your Heart", to occur on Christmas Eve 2015. The band's reunion was confirmed shortly into the new year alongside the news that they would be a headliner for Coachella 2016. They eventually went on tour, ultimately releasing their fourth album, American Dream, in 2017. Murphy went into more detail in this blog entry.

These following tropes are losing their edge: