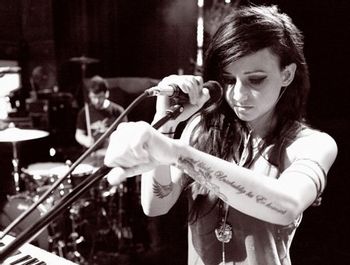 The singer in her natural habitat.
"Capture something invisible, organize it, give it movement, then spit it back from whence it came. Music is a dark, dark art."
— LIGHTS
Advertisement:

Lights is a Canadian pop singer (born in 1987 as Valerie Anne Poxleitner) known for performing songs such as "February Air", "Saviour", "Ice" and "Second Go" during the late 2000s. She released her self-titled debut EP in 2008, and her first full-length album The Listening in late 2009.