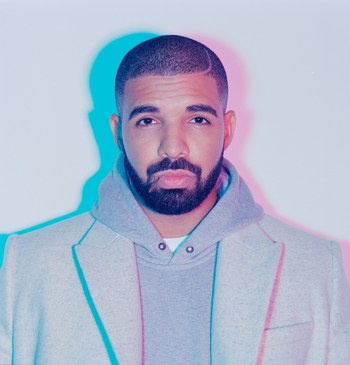 Aubrey Drake Graham (born October 24, 1986 in Toronto, Ontario), known professionally as just Drake, is a Canadian rapper and actor. Drake's father is an African-American (of Nigerian and Somali descent) from Memphis, Tennessee, and his mother is a white Jewish Canadian.

He originally became known for playing Jimmy Brooks on the television series Degrassi: The Next Generation (which, up until his guest host spot on Saturday Night Live, he didn't want to admit).

After making a few mixtapes, he was discovered by Lil Wayne in 2008. His first studio album, Thank Me Later, released on June 15, 2010, debuted at #1 on the Billboard 200. The album has since gone platinum. He released his second studio album, titled Take Care, in November 2011.

Drake has been nominated for several awards including Grammys, even being selected to perform at the 2010 Grammy award ceremony. Drake has also won several awards, including two Juno Awards in 2010 for Best New Artist, and Rap Recording of the Year, as well as the 2013 Grammy for Best Rap Album.

In 2012, Drake and producer Noah "40" Shebib launched the label imprint OVO Sound, which is currently distributed by Warner (Bros.) Records.

Not to be confused with Drake Bell or Nick Drake.