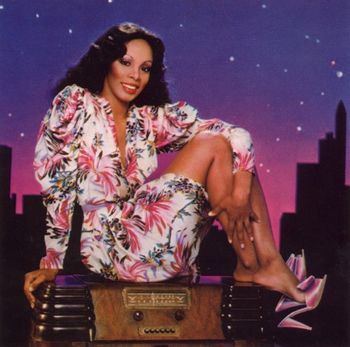 "Mommy, what's wrong with the lady on the record? Why is she moaning? Is she hurt?"
— A Last.FM user on "Love to Love You Baby". Presumably, this is what he said when he first heard the song.
Advertisement:

She was the Queen of Disco! Oh, but so much more.

LaDonna Gaines was born in Boston and originally trained as a gospel singer before becoming successful in R&B and Pop as well. Her big break came when she met producers Giorgio Moroder and Pete Bellotte, who managed her for the rest of The '70s, and recorded the single "Love to Love You Baby" (1975). She made several concept albums before reaching her peak with Bad Girls (1979), a double album that mixed Rock & Roll, Funk, Blues, Soul and Electronic Music to massive success. She soon broke from Disco.

After the 1970s, she had success with songs such as "She Works Hard for the Money" and "This Time I Know It's for Real", although she never recaptured her former glory. Her last album, Crayons, was released in 2008.

She died at her home in Florida after a battle with lung cancer on May 17, 2012.