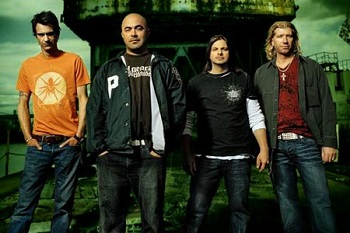 Staind is an American rock band formed in Springfield, Massachusetts. They consist of Aaron Lewis on vocals, Mike Mushok on guitar, Johnny April on bass, and (formerly) Jon Wysocki on drums.

They have changed up their genres since their first album. They started with a raw heavy-metal/nu-metal sound (Dysfunction), then did Break the Cycle, which received a lot of fame; their hit single "It's Been Awhile" has received a lot of radio play, and ranked high on many charts.

Staind started off making songs about depression, hate, and drug habits on their debut album, Tormented. Their next album, Dysfunction, was somewhat softer and less aggressive. It still revolves around the topics of dysfunction and anger. They then released their most popular album, Break the Cycle, which adopted a softer sound than their last album, containing ballads and slower, less aggressive tracks. This pattern continues up to their newest self titled album, which returns to their roots, and brings back a heavy sound.

Since their last album, they changed up their drummers. Their new drummer is Sal Giancarelli as of 2011.

It's been awhile, since I could, hold my tropes up high: