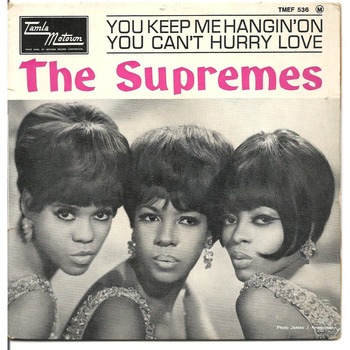 The classic '60s lineup of The Supremes. From left to right: Florence Ballard, Mary Wilson, and Diana Ross.
"The next three singers are aptly named. In the field of popular music, they’re really supreme. Ladies and gentlemen, The Supremes."
— Herb Alpert, introducing them in his Variety Show special.
Advertisement:

From the Brewster Projects of Detroit came one of the most successful groups on the Motown label and the most successful Girl Group of The '60s. The Supremes were second only to The Beatles in its pop culture impact on the decade: twelve number one singles on the Billboard chart in an eighteen-year career have ensured a legacy that has launched untold numbers of female singing groups to this day. Their vocal talent was matched with grace and poise that endeared this vocal version of a Rock Trio to global esteem.

The group, along with the early years of Hitsville USA, were the inspiration for the musical and movie Dreamgirls.

The phenomenon that greatly helped put Motown on the musical map began in 1959 when Brewster residents Florence Ballard, Mary Wilson, Diana Ross, and Betty McGlown organized a sister group to The Primes (with future Temptations Paul Williams and Eddie Kendrick), calling themselves The Primettes. Eventually, Smokey Robinson brought them to the attention of Motown exec Berry Gordy. At Hitsville USA, the group, having not yet finished high school, apprenticed by contributing backing vocals and handclaps to other artists on the label.

Original member McGlown became engaged and left the group in 1960; she was replaced by Barbara Martin. Still a quartet, The Primettes were finally signed to Motown in 1961 on the condition that they change their name; presented with a list of suggestions, Ballard decided on The Supremes. Martin left early in 1962, and it was decided to continue the group as a trio.

In 1964, The Supremes scored their first #1 hit on the Billboard chart with "Where Did Our Love Go?", beginning their tenure as the chart-topping powerhouse that has made them frequently heard to this day on both classic soul and oldies radio. Among their other '60s chart-toppers were "Baby Love", "Come See About Me", "Stop! In the Name of Love", "I Hear a Symphony", "You Can't Hurry Love", "You Keep Me Hangin' On", "Love Is Here and Now You're Gone", "The Happening", "Love Child", and "Someday We'll Be Together".

1967 saw some major changes for the group. Flo Ballard, talented but extremely troubled, was fired after performing drunk onstage and replaced by Cindy Birdsong. Concurrently, the group's billing changed to Diana Ross & The Supremes, cementing Ross once and for all as the group's star. The next year, their songwriting/production team of Brian Holland, Lamont Dozier and Eddie Holland left Motown over some disputes with Gordy. While Gordy put several other Motown staffers to work on Supremes music, he also began grooming Ross for a solo career, and she officially left at the end of 1969, though the group continued with Wilson and new lead singer Jean Terrell.

Similar to what happened to Genesis later, The Supremes' history falls into two distinct eras. Most casual listeners and oldies fans would be familiar with the above songs and others produced in The '60s, when Ross was still a member. But in The '70s, the group, anchored by Wilson, were heard mostly on R&B radio and are staples of classic soul programming to this day.

"Come see about my tropes"