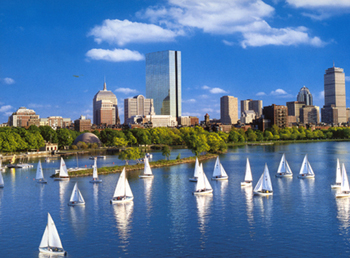 "Down by the river, down by the banks of the River Charles (aww that's where it's happening baby)
That's where ye'll find me, along with the lovers, muggers, and thieves (aww, but they're cool people really)
Oh I love that dirty water, oh, Boston, you're my home"
— "Dirty Water

" by The Standellsnote Ironically, The Standells were actually from Los Angeles. This however has become an anthem for certain Boston bands, covered particularly in the punk scene
Advertisement:

Boston is the largest city in Massachusetts and New England, the capital city of Massachusetts, and one of the oldest cities in North America, having been founded by John Winthrop in 1630. Along with New York City, Philadelphia, Baltimore, and Washington, D.C., it is one of the five major cities of the Northeastern United States. Ironically, named in honour of a bucolic country town in Lincolnshire, England, which has long been outstripped by its far more famous colony in terms of size, familiarity, and global importance. Boston, England, now only appears on TV (regularly) in "cops-with-cameras" shows as an example of English lawlessness and bad driving.

Boston played a critical, perhaps the key, role in getting The American Revolution off the ground. Boston spent the better part of a decade forming mobs against British authorities, first to protest various taxes, then to protest the presence of British forces sent to enforce said taxes (the Boston Massacre, Boston Tea Party, etc.), eventually culminating in the forming of militias and the start of all-out warfare before any of the other colonies had signed on to the whole "independence" thing. (The city is still littered with memorials and tourist attractions based around the colonial/Revolution era to this day.) After independence, Boston was the third-largest city in the new nation and remained one of the biggest for the next two centuries. Today, it ranks #21 in population among American cities, though that's a bit misleading—its metro area is #11.

◊.) The former is less true than the latter, although the difficulty of getting around does encourage aggressive driving. The irregular street patterns can be blamed in part on the fact that Boston was originally built on a multi-lobed peninsula, with land gradually reclaimed all around it: in the colonial era, the only way out by land was through what is now known as Washington Street (not to be confused with two other streets in outlying parts of Boston with the same name), and the Back Bay (one of the few neighborhoods designed around a rectangular street grid) wasn't filled in until the mid-19th century. (Charlestown and South Boston were likewise peninsulas, while East Boston was a group of islands.) "Interesting" road design notwithstanding, Boston's streets are still easier to navigate than London's.

That said, Boston's city center is quite walkable and perhaps best enjoyed on foot or bike; downtown is really not that large and there are many wide tree-lined sidewalks. If you can walk across EPCOT Center, you can handle the Freedom Trail, the city's most popular walking tour. Just a warning though, you will probably want to visit in summer. Real Life New England winters aren't always as pretty as fiction depicts, though there are mild years as well as bad ones. They also aggravate the driving problem by causing lots of potholes. Alternatively, if you want to avoid both the snow and the muggy summer heat, late spring or autumn would be your best bet.

Public transportation mostly worksnote It's officially called the MBTA, or Massachusetts Bay Transportation Authority. Believe it or not, the "T" signs were inspired by the ones from the Stockholm Metro, which is called the Stockholms tunnelbana, hence the letter T., but it's also very old and under a lot of debt (due to politics, mismanagement, etc.), so breakdowns occasionally happen. There is also the caveat that the last trains run at sometime between half past midnight and 1 am on weekdays, which is a problem because last call is at 2, though weekend hours go to 3 am.

Speaking of locals, Hollywood depictions to the contrary, they are generally very nice people. Just remember not to bring up the New York Yankees, the Los Angeles Lakers, the Montreal Canadiens, the Detroit Red Wings and Pistons, or LeBron James. Otherwise, thou shalt know the true meaning of Serious Business.(It's also not advisable to talk about paahking one's caah in Haahvahd Yaahd, let alone actually try to park there, which is a good way to get arrested or at least towed. And, whatever you do, never ever bring up Charles Stuart

...) Boston is a devout sports city, with major and historic teams in all four major sports... sort of. The Red Sox were a strong team in the early 20th century (including winning the first World Series), went through an 86-year championship drought, and rose to become a dominant team in the early 21st century. The Celtics are tied for the most titles in NBA history, most coming from a truly absurd eight-year championship streak in the '60s. The Bruins are the oldest American hockey team and are consistent contenders. Finally, the Patriots started out in the city before moving to Foxborough, which is slightly closer to Providence than Boston, and the team represents the New England area as a whole (not that it stops Bostonites from claiming all of the team's Super Bowl wins).

Outside of the professional sports-team rivalries, Boston is still noteworthy in sport, for hosting the oldest annually raced marathon on Earth, the notorious 26.3-mile Boston Marathon. Why notorious? In a word, topography. Although the race is generally downhill, the point at which most runners are just about to "hit the wall" (run out of stamina) is right at the start of a long uphill stretch (part of which is, appropriately, called "heartbreak hill"). This is quite possibly the origin of the phrase "Boston Strong", a phrase which gained new meaning after the 2013 bombing near the finish line.

Another item of note is that Boston contains more colleges and universities than any other city in the world, and even more if you include Cambridge, its neighbor on the other side of the Charles River and the oldest college town in the United States, home to both Harvard University and MIT. Word to the wise: do NOT mix up Boston University and Boston College. It will not end well.note For a start, BU is Episcopalian and BC is Catholic. The list of differences and sore points goes trundling on from there. About the only connection between BU and BC is Commonwealth Avenue. Also note that those colleges include the Berklee College of Music and the New England Conservatory; as a result Boston has a disproportionate number of musicians with a connection to the city across a surprising number of genres. It is also home to a wide variety of world-famous live music venues, namely the Paradise, the Sinclair, the Royale, the Brighton Music Hall, and the Middle East (for larger locations) and P.A.'s Lounge, Great Scott, ONCE, and O'Brien's (for smaller locations). Musically, its calling cards include indie rock, street punk (famously shown by the Dropkick Murphys, but the Street Dogs, the Ducky Boys, and the ska-punk Mighty Mighty Bosstones definitely represent Boston), post-punk, and new wave (namely The Cars, Pixies, Mission of Burma, and Galaxie 500), hardcore (namely Slapshot, Sam Black Church, Converge, Overcast, and Vein), and a small but dedicated hip-hop scene (namely Gang Starr, Ed O.G., 7L & Esoteric, Mr. Lif, and Slaine).

Nicknamed "the Hub", as in "The Hub of the Universe", which gives you an idea what Bostonians think of their city. You can find a large metal plaque literally engraved with Hub of the Universe in Downtown Crossing, or at least you could. Currently fruit vendors' trucks cover it up.note There is also still visible a to-scale model of the solar system with the Museum of Science's planetarium as the sun, and Pluto at the end of the "D Riverside" line of the T. It is also sometimes called the hub of the New England road network, as anyone who's ever tried to plot the least zigzaggy course between Providence, Rhode Island and Portland, Maine can attest.note Big Hint: take Route 495, which makes a wide loop around the city. Trying to figure out how to make the same trip by train is even more mind-bending, because the train tracks going northward begin at North Station, while the tracks going Everywhere Else begin/end at South Station, and the two sections of track don't physically meet,note though there have been plans to link the two stations

currently in Development Hell which means you're stuck using the T to get from one station to the othernote North station is easy to find, at least. It's directly under the TD Garden (home to the Celtics and Bruins). If you're trying to do this while there's a game on, good luck. If you're trying this while there's a playoff game on, you're either completely unhinged, or well on the way.

In recent years, due to generous tax credits offered by the city and the state of Massachusetts after most of The Departed was filmed in New York City, many more major-studio movies have been set and produced in and around Boston. These films have given rise to their own clichés, which Seth Meyers adroitly parodies in his 2016 fake trailer, Boston Accents

See also Southies and Hollywood New England for more information. The latter is more often than not averted in real life.

Notable Pop Culture Things From or Set in Boston