Film / The Friends of Eddie Coyle 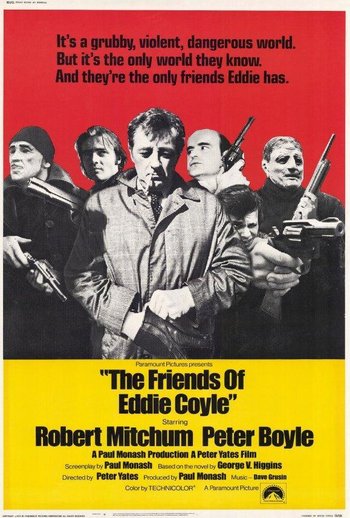 The Friends of Eddie Coyle is a 1973 crime thriller directed by Peter Yates, starring Robert Mitchum, Peter Boyle, and Alex Rocco. It is based on the book of the same name by George V. Higgins. It's based on the real activities of Whitey Bulger's Winter Hill gang, which later inspired The Departed.

Eddie Coyle (Mitchum) is an aging and low-level Boston gangster who is facing a robbery conviction. Desperate to avoid prison, Coyle works with ATF agent Dave Foley to rat out his criminal associates in the hopes that he can earn a lighter sentence. Can Coyle navigate both sides of the law to stay out of prison... and above ground?