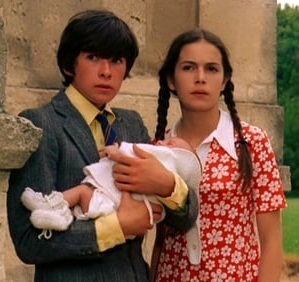 Yep, this is that kind of movie.
Advertisement:

Friends is a 1971 teen romance film directed by Lewis Gilbert.

A neglected 15-year-old English boy named Paul Harrison (Sean Bury), living in Paris with his wealthy businessman father, befriends a 14-year-old French girl named Michelle Latour (Anicée Alvina), who recently arrived in Paris after becoming orphaned. Together, Paul and Michelle decide to run away and travel to the idyllic marshlands of the Camargue where Michelle's father had a very small cottage. There, Paul and Michelle become lovers. Along the way, both Paul and Michelle discover many of the troubles that can be involved in family life when they play at being responsible adults.

The film's soundtrack music was composed by Elton John, with lyrics written by Bernie Taupin.

This film and its sequel feature examples of: