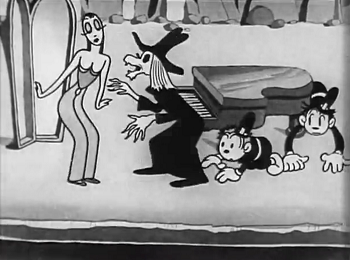 Magic Mummy is the 20th Tom & Jerry short by Van Beuren Studios to hit theaters. It came out on February 7, 1933, being preceded by Tight Rope Tricks and followed-up by Panicky Pup. Of the 26 shorts total, Magic Mummy is the only horror-themed one to be produced after the series starter Wot a Night and it also is the last short John Foster, the main writer, contributed to. As per the credits, the script and direction are by John Foster and George Vernon Stallings, while the score is the work of Gene Rodemich. The animation is uncredited but thought to be by George Vernon Stallings, Frank Tashlin, and Jim Tyer.

Magic Mummy is a loose adaptation of Trilby, a popular novel which cultural relevance got another notch on its belt as recently as the 1931 movie adaptation Svengali. On top of that, Magic Mummy taps into mummy fiction, a genre that in 1932 got a major boost with the release of The Mummy.

Tom and Jerry are cops out on patrol in radio patrol car 44. It's a quiet night, so like the rest of the police department and prisoners they enjoy a performance of "The Cop on the Beat, the Man in the Moon, and Me" by two of their colleagues. The party is ended when the police captain gets a call that another mummy is in the process of being stolen. Tom and Jerry are sent out to apprehend the thief and track him to a secret lair beneath a cemetery. They witness the thief, a ghoulish musician, unwrap the mummy and force her to sing to his piano play at a theatre where the audience consists of the cemetery's skeletons. Tom and Jerry break up the performance to retrieve the mummy, but when the ensuing fight moves into the dark corners of the lair, Jerry has a chance to grab the sarcophagus and return to the station without Tom, which'd make him the big hero. And so he is received at the police station until he deigns to open the sarcophagus and not the mummy is inside, but an unconscious Tom.

The voice of the mummy reminds of Betty Boop, and that is because she was voiced by Margie Hines, Betty's original voice actress. The mummy sings "Sing (It's Good For Ya!)", a 1932 song that in 1935 was also sung by Betty Boop as voiced by Mae Questel in Judge for a Day.