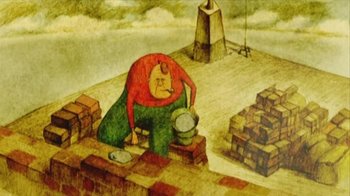 Despite the French title, this is in fact a Japanese animated film. The story features an old man, living alone in a small room that turns out to be atop a high tower. The reason that the tower is high is that the old man's whole city has been flooded and is under several stories' worth of water. The waters are still rising, in fact; when the water laps the front door of the old man's room he builds another room on top of the one he's currently in (hence the title, as the old man builds cube after cube).

One day the old man, who is always puffing on a pipe, drops it, and the pipe falls far down to the bottom of his tower. The old man promptly dons scuba gear and dives to the bottom to retrieve the pipe. As he dives through the abandoned, flooded floors of his tower, things that he sees remind him of his old life.

La Maison en Petits Cubes is the only Japanese anime product to win the Academy Award for Best Animated Short Film, and the second anime to win an Oscar overall, following Spirited Away.