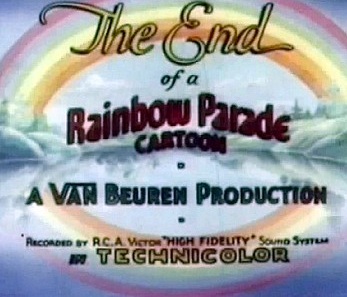 Van Beuren Studios (pronounced Van Burr-en), originally known as the "Fables Studio", was a cartoon studio that lasted from 1928 to 1936. It is the least known cartoon studio of The Golden Age of Animation, yet its brief history is dotted with interesting films and major animation talents.

If asked what Van Beuren Studios was famous for, most people today would probably look at you with a blank stare, not knowing that the little known production company also helped lead the pack when it came to classic cartoons of their time.

Van Beuren Studios was started by an upstart named Amadee J. Van Beuren. Paul Terry was also involved in the studio’s history, but later left to start his own production company, called Terrytoons. Van Beuren’s most recognized characters were called “Tom and Jerry,” but bear no relation to the cat and mouse characters released by MGM Studios eight years later. Their success was modest, yielding 26 cartoons in all. Aesop’s Fables, the studio’s other front runner gave rise to the now not so recognizable Cubby Bear, one of the series’ stars.

Walt Disney Studios had already made a splash with music and sound effects in their early toons, and Van Beuren promised to follow suit and do the same later on. The producers hired Disney veterans Burt Gillett and Tom Palmer to create a new series in hopes of jump-starting the B-list studio’s reputation. The somewhat well-received series was called “Rainbow Parade”, a series of lavish Silly Symphonies clones, also starring licensed characters like "Toonerville Folks" and "Felix the Cat".

Despite the studio’s mild successes during its waning years, it was forced to closed its doors when RKO Radio Pictures decided to release Walt Disney cartoons, rather than those produced by Van Beuren.

Like many non-Disney/Warner Bros. cartoon studios, critics and historians generally tend to give Van Beuren the footnote treatment, writing off the cartoons as cheaply produced drivel—but this isn't quite true. For all the sloppy animation and one-note characters, there are some inspired gags here and there, as well as some very good musical scores provided with each cartoon. Despite this, many of the shorts were scattered and lost for a long time, due to their public domain status and lack of care. The fact that the studio's role in the History of Animation was very minor and tangential compared to the other studios does not help. Fortunately, thanks to recent DVD collections, especially from Thunderbean, and the fact that all of the studio's cartoons are public domain, the bulk of this studio's sound output is available on DVD for viewing.

It is also worth noting that Van Beuren Studios was located directly across the street from Fleischer Studios, one of their biggest competitors.

Works of the studio:

Tropes related to the studio: