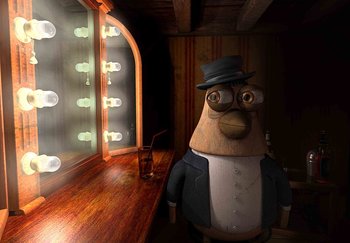 As the cartoon opens, a mechanical arm on a spring can just barely be made out moving around a darkened room. Soon the light flips on and the room is revealed to be a dressing room. The occupant of the dressing room is a bird in a tuxedo, who appears to be an opera singer. As the bird practices by singing his scales ("la la la la la la la"), the mechanical arm is busy setting out drinks for the bird to gargle with, while also smoothing the bird's feathers and dusting the bird's tuxedo and hat.

But why a mechanical arm? And why does the camera keep moving in a circle?