Western Animation / Zoom at the Top 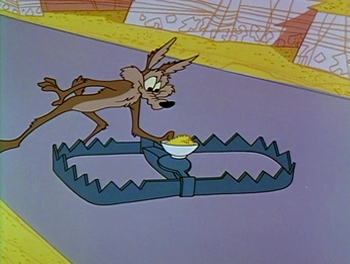 At least it's not a Burmese tiger trap.
Zoom at the Top is a 1962 Merrie Melodies cartoon written and directed by Chuck Jones, starring Wile E. Coyote and the Road Runner, up to their old antics.
Advertisement:

Wile E. Coyote tries to get to the Road Runner on the other side of a canyon, but as he takes several steps backwards to rev up, the precipice that he stops on breaks off and falls with him, only to land safely between two cliff ends. But just as the Coyote gets off from the rock and onto the left cliff, it breaks off and falls down, followed by the broken precipice crushing him.

Once he gets back up, he resumes his pursuit of the Road Runner, which ends when he and the bird stop right above a natural arch, pointing downwards. Wile E. then falls down to the bottom of the road as the Road Runner escapes once again...

...and that is when he starts his new unsuccessful schemes, including a bear trap, a jet mobile, an ACME Instant Icicle Maker and a boomerang coated with iron glue.