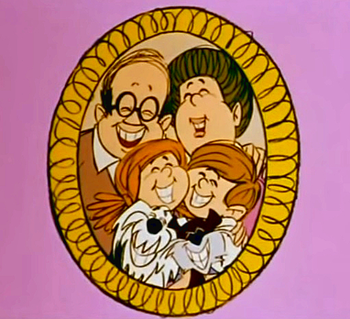 What The Simpsons or the Griffins are to Americans, the Mézgas are to Hungarians.

This Hungarian animated show, produced by Pannonia Film Studio, revolves around the life of a Dysfunctional Family: Bumbling Dad Géza, his bossy wife Paula, their ditzy daugher Kriszta and genius son Aladár, along with their pets Blöki the dog and Maffia the cat. Rounding out the cast is their Deadpan Snarker neighbour Máris, and, in the first series, their 30th century descendant MZ/X.

Three series have been produced, in 1968-69, 1974 and 1978, respectively, with vastly different plotlines. In the first series, Üzenet a jövőből: A Mézga család különös kalandjai (Message from the Future: The Strange Adventures of the Mézga Family), Aladár contats MZ/X on his radio. Once an Episode, Géza and Aladár try to avoid doing the chores they get from Paula by asking help from their future relative. Hilarity Ensues. In the second series, Mézga Aladár különös kalandjai (The Strange Adventures of Aladár Mézga), Aladár builds a spaceship and visits various Planets of Hats, accompanied by Blöki. In the third and final series, Vakáción a Mézga család (The Mézgas on a Vacation), the Mézgas and Máris (as a translator, ostensibly per the invitation as "the nurse" for the kids) go to Australia to meet Paula's former fiancée, the Con Artist Pisti Huffnágel, and the family ends up on a World Tour looking for him/escaping from various circumstances. The last series notably lacks the sci-fi elements of the first two.

Created mainly for adult audiences, the show was very popular in Hungary for its witty plot and unique, surreal humour. It has been dubbed to German, Slovakian, Czech, Italian and Romanian. A fourth series, A Mézga család és a (sz)ámítógép (The Mézgas and the Computer), got into production in 2005, but ended up in Development Hell due to financial problems.

Tropes present in all three series:

Tropes specific to the first series:

Tropes specific to the second series:

Tropes specific to the third series: