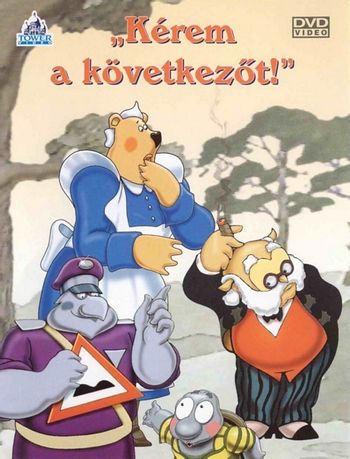 Kérem a következőt! (literally: "Next one, please!") is a Hungarian animated series produced by Pannonia Film Studio. Featuring a cast of Funny Animals, the show stars an owl medic and psychologist named Doktor Bubó. Once per Episode, Bubó attempts to stop a trouble-making animal by psychological methods, only to fail every single time and cause even bigger trouble. He usually gets help from his assistant, the flirty bear nurse Ursula, his best friend, the falcon police officer Sólyom csőrmester, and Sólyom's sidekick, Teknőc Ernő, the dim-witted tortoise.

Three 13-episode seasons have been made, the first two in in 1973 and 1974, and a third one much later, in 1983. There is also a novelization, titled Doktor Bubó, published in 1979, retelling the plot of seven episodes of the series and adding a backstory for Bubó.

Kérem a következőt! provides examples of: