Animation / Mr Krbec and his Animals 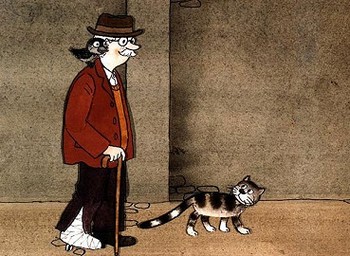 Mr Krbec and his Animals (original title O zvířátkách pana Krbce) is a charming series of animated shorts for children, one of the so called Večerníček (TV bedtime stories).

Mr Krbec's dream has come true: He gets a job as a castle warden and tour guide in the Castle Kulikov. It's a live-in position and he moves there with his tom-cat Kokesh. He meets an old inhabitant of the castle, Kukula the owl, and Kocanda the jackdaw, a young bird. Kukula tells Mr Krbec she pities him because the castle is haunted. And it sure is... It is haunted by the spirit of Duke Ruprecht who used to be the owner of Kulikov. He wants the new castle warden out of his home. Luckily kindly Mr Krbec is not scared and Ruprecht soon befriends him. Ruprecht stays mischievous and somewhat dissatisfied, but occasionally he's even helpful.

Mr Krbec, his animals and Ruprecht have many merry and wacky adventures. Most mischief is caused by castle visitors and tourists, or occasionally by Ruprecht or Kokesh. There is a masquerade ball for children, then Aunt Klotylda visits with her goat Tylda, two jovial singers stay for a night, there is a flood in the children's summer camp ...and so much more.

It was produced by Czechoslovak Television in 1977. The series was drawn by Vladimír Renčín, written by Stanislav Havelka & Petr Chvojka and directed by Václav Bedřich. Petr Skoumal composed its adorable cheery score. The series is dubbed with gusto by Josef Abrhám. He has all the roles — the narrator, Mr Krbec, tomcat Kokesh, jackdaw Kocanda, owl Kukula, the spirit of Duke Ruprecht and many more.

In 2010, the animated shorts got its sequel: The Ghosts of Kulikov (Strašidla na Kulíkově).

Mr Krbec and his Tropes: