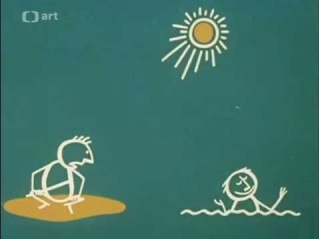 O misto na slunci ("A Place in the Sun") is a 1959 animated short film from Czechoslovakia (the Czech part, now The Czech Republic) directed by Frantisek Vystrcil.

The 5 1/2 minute short involves two men, drawn as stick figures against a plain greenish background. The sun, shining in the upper right hand corner, casts a beam that lights up the ground between the two men. Each of the two men both want to stand in the sun and get warm. When they find themselves unable to share the circle of sunlight peacefully, the two men begin to fight.

Not to be confused with Oscar-winning live action feature film A Place in the Sun.