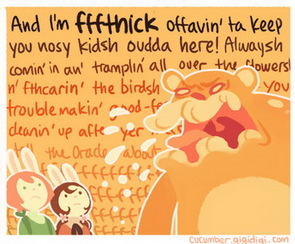 Granted, he doesn't have any teeth.
"This is the latht time I work with thomebody with a thpeech impediment!"
— Daffy Duck about Donald Duck, Who Framed Roger Rabbit
Advertisement:

May be faked as Obfuscating Stupidity, or has to be overcome to look intelligent. Rarely is The Hero or a Love Interest affected with this, frequently The Loser. Not to be confused with scared stuttering.

May manifest as a lisp, or as a stutter. Or it may weveo itself as a weawy pwofound twoubo with the wettehs aw and ehw.

May overlap with Verbal Tic. Could be caused by Fang Thpeak. Elmuh Fudd Syndwome is a Subtrope (and so is Porky Pig Pronunciation). Can lead to Viewer Name Confusion.