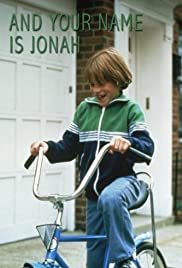 ...And Your Name Is Jonah is a TV movie written by Michael Bortman and directed by Richard Michaels that aired on CBS on January 28, 1979.
Advertisement:

Jenny Corelli (Sally Struthers) and her husband Danny (James Woods) are shocked to learn that their son Jonah (Jeffrey Bravin), who has spent the last three years and four months in a hospital for the mentally handicapped, is in fact deaf, but intellectually normal. Jonah's parents and his younger brother Anthony (Jeremy Licht) struggle to readjust to life with him. His parents take him to a school for the deaf run by Mrs. Marquardt (Ruth Manning), who believes that deaf children must be made as normal as possible. Jonah is banned from expressing himself with his hands and put through endless drills focused on Reading Lips and making sounds with his mouth, but he makes no progress, and his parents wonder if there's a better way.

...And Your Name Is Jonah contains examples of: