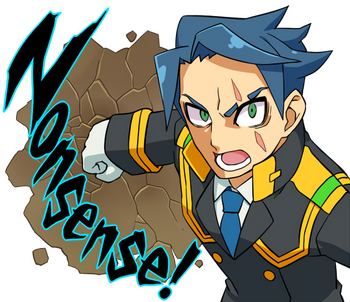 That's gonna leave a mark. On his hand, that is.
"I'm so angry I could punch a hole in a solid concrete wall!"
— Colonel Volgin, Hiimdaisy: Let's Destroy the Shagohod!
Advertisement:

When things are going badly wrong, the hero needs to hit something to prove he's a badass, but can't hit anyone because that would be unheroic. So he hits something inanimate. His pain proves he is sincere.

Done by a guy as a sign of Testosterone Poisoning, but also common among Tsundere and people who are simply approaching the limit of what they can take. It can also be the first sign that you're staring into the face of a Mama Bear/Papa Wolf. In some cases, it can also be a form of Self-Harm.

This trope does not cover martial arts techniques which may include punching hard surfaces to harden the knuckles, nor does it cover punching things you need to break, if there is a chance of success. This trope also doesn't count during fight scenes.

A common subversion is the object in question being a little harder than the hitter was expecting. If it's the wall we're talking about, then the most likely case is that they accidentally hit the stud behind the wall.

Tends to avert Invulnerable Knuckles, but not always. Subtrope of Percussive Therapy.

It's also a common reaction to Rage Against the Reflection towards mirrors affixed to walls.

When Belos starts to destabilize, he punches a pillar in his throne room repeatedly until his body re-stabilizes, leaving it covered in black ooze.

When Belos starts to destabilize, he punches a pillar in his throne room repeatedly until his body re-stabilizes, leaving it covered in black ooze.