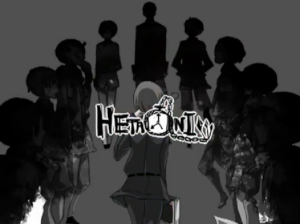 Don't worry guys, it's not like anything bad is going to happen to us! ...Right?
Advertisement:

HetaOni is a fanmade Hetalia: Axis Powers game told in RPG format, based on the horror game Ao Oni. Since its creation, most fans have heard of/played/or watched the game.

It begins where Italy hears of a haunted house, tells America about it and they bring the rest of the Axis and Allies, along with Prussia and Canada, to investigate. As it turned out, a monster resembling America's alien friend Tony begins to hunt them and they have to do what they can to stay alive.

A playable English version can be found here.

HetaOni was put on hiatus/discontinued in 2011, due to the Japanese Tsunami. The creator, Tomoyoshi, lost all the data for her project and, despite its official status as "On Hiatus", many believe it is permanently discontinued, as the creator doesn't want to create it all again and hasn't taken any steps to making a continuation. It's also been several years, so it's understandable.