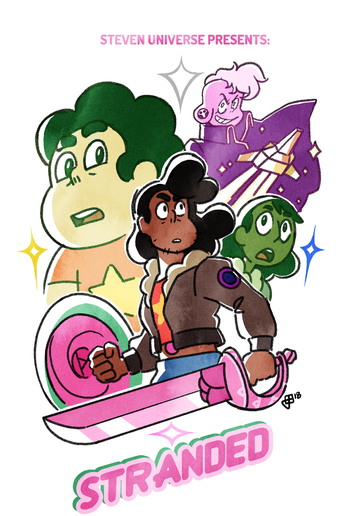 Stevonnie finds themself trapped on the life-bearing moon of a planet harvested for its resources long ago. After a time surviving in the strange new environment, they find an old Diamond base and set up camp there, trying to survive in the abandoned structure.

And then they go to sleep, and have a rather bizarre dream. They're inside Connie's house, only everything else is gigantic — including Priyanka, who rises up from the floor while having a phone conversation about... invading a planet?! The dream shifts to a scene in the past of the very building that Stevonnie is currently asleep in, along with Priyanka in full Yellow Diamond cosplay currently acting out Yellow Diamond's role in directing the planet's invasion.

Stevonnie (during the dream) is surprisingly enthusiastic about the invasion, and bothers Yellow Diamond about getting to command a dropship. Yellow Diamond brushes them off, saying that they'll get command once they get their own colony. This doesn't stop Stevonnie, who switches to complaining that that they don't even have one colony when Yellow has so many, and throws a huge hissy fit about wanting their own planet and army. A line from Yellow Diamond and a quick reflection in a panel reveal the person the memory belonged to, whose role Stevonnie has been acting out the whole time — Pink Diamond!

After waking up, Stevonnie uses a code that Yellow Diamond used in the dream to contact Lars, who rescues them.

Example of:
Rage Against the Reflection